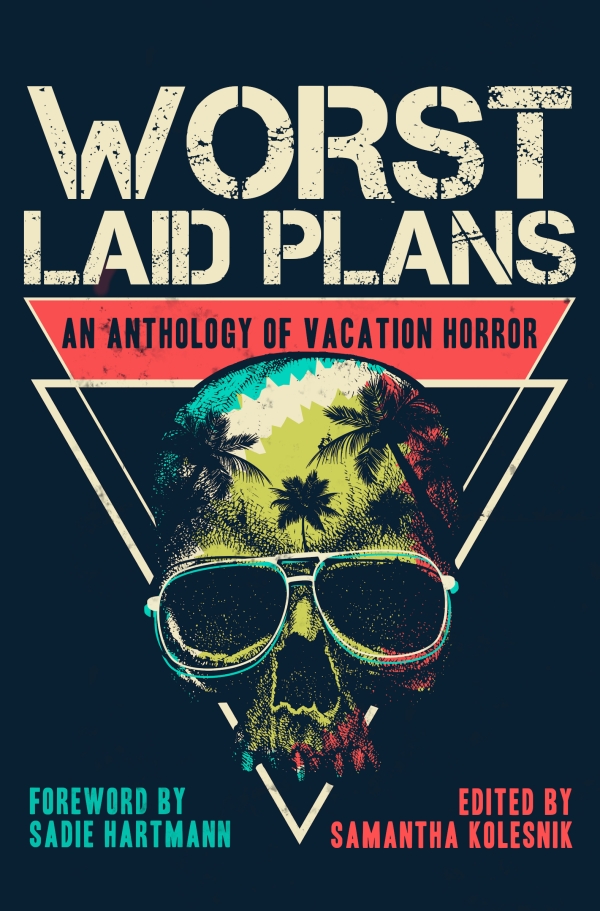 Worst Laid Plans, as stated in the title, is an anthology of short horror stories, each written by a different author and edited by Samantha Kolesnik with a foreword by Sadie Hartmann.  While they take place in different spots around the globe, they all revolve around one central theme:  vacation.   The fourteen stories featured in the collection take you through a multitude of areas involving the supernatural and the weird, as well as good old fashioned serial murder and, yes, dolphin sex.  No pieces are the same, and they all produce their own feel, as well as set a scene specific to the story, however weird they may end up.

The book works very well when it hits the ground running.  The stories featured keep the pages to a minimum for the most part, all of which staying well under twenty.  This works to its advantage in the grand scheme, although some of them seemed a bit long still.

A perfect example of a short bang is the book’s opener, “You’ve Been Saved” by S. E. Howard.   Howard’s addition involves two friends following an RV driven by an older couple, who’ve appeared to have kidnapped a younger woman.  The dialogue works well, if a little sappy at times, but the characters are engaging enough to keep you hooked until the twist.  Side note:  The classic Frasier episode where Niles gets trapped in an ammo wielding couple’s RV set the mental picture for Bill and Libby.

A few tales did feel a tad long in the tooth, as the writer(s) seemed overly wrapped up in character development, realizing in the last couple of pages that their time was coming to an end.  This led to an abundance of things happening in such a quick succession that it became overwhelming, feeling rushed.  For most of these inclusions that, too worked out, though as a slap in the face was just what I needed to keep moving along.

One example of this is “Peelings” by Kenzie Jennings.  It is written well, overall, and follows a four-piece family during their trip to the “happiest place on earth”.  It flows nicely, and the characters are believable.  The pacing was a bit of a slog for me, resulting in too much of a buildup, although the payoff is a decent one.

On the flip side of that particular coin, the majority of stories in the collection zipped by before I knew it, keeping me engaged the entire time.  My favorite instance of this is “Deep in the Heart” by Waylon Jordan, a tale about a small family on a cave tour in Texas.  The scene is laid out perfectly, the dialogue is absolutely believable, and the story arc is quick and to the point.  It’s the right amount of bloody, and doesn’t spend too much time on the characters, resulting in my favorite selection from the collection.

The second feature, “Summers with Annie” by Greg Sisco, is nothing like anything else in the book.  The plot takes you to an island in the 1930s and 40s, and centers around a boy struggling with the idea of a movie that potentially steals the people he loves.  It’s sad, but also heartwarming at the same time, because you want the boy to be happy, but you’re not sure if that’s going to happen or not.  A perfect contrast to the bloody monsters found throughout the rest of the pages.

Speaking of bloody monsters, one that I didn’t particularly enjoy was “The Cucuy of Cancun” by V. Castro.  In this, an ancient creature in the form of a pretty lady preys on tourists at a hotel.  The premise is sound.  Creature feature.  That’s my favorite type.  With that in mind, however, this did not click with me as much as it should have.  I felt Castro put too much emphasis on vulgarity and curse words, when they just simply didn’t need to be there.  I’m not one to oppose the use of earthy language by most means, but it distracted from what could have been a high point in my time with the book.

Despite this, Worst Laid Plans does keep you engaged and entranced throughout.  Along with the stories I’ve mentioned above, you’ll find yourself wondering what sort of people have sex in crocodile suits, who that lady in the shower is, and what the hell kind of shortcut did Mike just find in the Badlands.  Every story is uniquely different, and most are very well written.  If you’re a fan of short stories and horror, you will not be disappointed.